[P] what once was mine 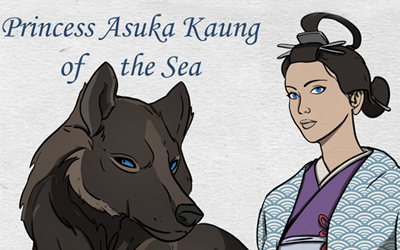 ​
'We leave in fifteen minutes,' Her father's chief servant relayed the mention, Asuka dressed, and ready nodded in understanding. It was the night of the full moon; the ceremony would be conducted just before the moon was highest. Thankfully, Asuka had rested well during the day and felt wide awake. 'your majesty, your fan," Her servant offered a purple decorated fan, golden tassels with gemstones secured at the end of the threading. It was expensive, a gift from her father, he mentioned a local artist had crafted it just for her. Asuka ignored the implications that it was a courting item, deciding that if the man had no courage to greet her, she had no interest in him. A series of rapid, open and closings, the sound reminded her of her first trip to the entire moon ceremony. Her mother had gifted her a pretty blue and white fan, which she had used as a young girl years before. A unique gift for a young girl. The memory of the night came back so vividly.

The air was humid, the first full moon of summer. She sat in the last open carriage; it rocked like a boat, almost lulling her to sleep. Her twin beside her, but further to the other side, what he was thinking about Asuka only had the slightest of inklings. Their status as royal children dictated how they conducted themselves; Asuka, polite and proper, sat proudly in her carriage. The evidence of her nerves present in the grip she maintained on the fan, knuckles white from tension. The crowd that gathered along the
route to the temple, she felt all eyes on her. In truth, hardly anyone paid attention to her. She and her twin were further down the line, and given her gender, she had no actual claim to anything beyond her last name. Such thoughts did not last within her head, fluttering away like the moths tempted by the lights of the city.

For unknown reasons, the carriages stopped. Asuka glanced about, curious as to what caused such an event. The crowd seemed slow to move from the path, but it wasn't out of anger but excitement. Seeing the royal family is considered a gift to the common folk. Content to wait for the carriages to move once more, Asuka found the faintest hint of courage to look onto the crowd. The crowd seemed endless; hundreds if not thousands of people shouted for her to smile, wave, or even speak to them. The words did not come, and all she mustered was a weak nod of her head and shy away.

Nonetheless, the crowd loved it! Shouting the family name, looking away to avoid further embarrassment. Asuka caught a glimpse of a young boy, not much older than her older brother. They eye met, a rarity given the strict rules about eye contact. She was relieved when he didn't shout for her or even wave; hehe simply bowed. Yet the way he did it seemed genuine, that he wasn't doing it as a show of respect but a polite distant greeting. Relaxed with his gesture, she returned the bow with less depth as was taught.

The carriages hadn't moved yet, and the urge to know his name overwhelmed her. He seemed friendly, despite his disheveled appearance. She almost called out to him, but the lurch of the carriage stopped her. In a panic, she glanced about to those in the carriage, but no adult made eye contact, solely focused on their orders. Looking back for him, she had only the slightest of seconds. Tossing the only thing she had in her hand, the newly gifted fan. Asuka willed the fan to land within his reach and clapped her hands when it did. "What's your name?" She called out to him, only to be drowned out by the sound of carriage wheels. The procession picking up speed to make up for the lost time.

Asuka never saw that boy again, even asked about him. The verbal lashing she got from her mother about losing the fan was enough to stop her from asking.

As the years went on, she thought of him infrequently at best and only when she has gifted a new fan or told to ready for the full-moon ceremony.

This would be the first that she sat entirely alone; her twin would be up front, with the King to be showcased as a treasure now that he had been named Crown Prince. Her twin's rise in power did not bother her.

The return of the chief servant had ushered them all into their respective carriages. Asuka had persuaded her father to allow her to take a different route to the temple. Since her brother's death, she had been taking the alternate route to avoid the crowds and unwanted attention. The full-moon ceremonies had changed from fun of light to quiet time in prayer, while other members of her family partook in the more significant, grander, and more public ceremony.

Her solo route allowed for quick travel through the city's side streets, her guard minimal for flexibility to navigate the roads, and her driver hyper-focused on directing the carriage. She had almost opted to discard the veil the moment they were out of eyesight of her father, but given the men guarding her were not of her court, she felt further compelled to keep it. Luckily it was light and flowed easily in the cool night air.

The Dragon of Sol

He'd be a liar if he said he didn't think of the princess often - far more than someone well; like himself should be. Kaito was the scum of Glabar, he spent most of his days stealing when he couldn't find jobs to scrap up at the harbor for sailor work. It wasn't that he was a bad sailor, it was just that majority of the city disliked him. Anyone that knew him, a bastard child who broke most of their customs and laws before breakfast each morning. Well. Any honorable Captain wouldn't be associated with the likes of the local street dog, but there were some opportunities still, old rickety old ships that shouldn't even be on the water anymore.

Kaito huffed, shifted much like he was on most days, he preferred this form to his other ninety percent of the time. The young man had sauntered away after successfully snatching himself a meal, it wasn't much; a single fish from one of the many stands that littered the streets for sale. It had fallen to the ground, and Kaito was able to walk by and pick it up casually without notice. Now it lay off to one side of him where he was laying tucked away in one of the narrow alleys where the buildings almost touched. The slim pass between them was filled with various broken crates, broken pieces of cardboard, a few abandoned shreds of red cloth. But it was quiet, away from the crowds; and the guards. Where he could eat his meal in peace, only the occasional person or pair would pass by and he was certain most of them didn't even notice his presence. Kaito watched lazily, one paw crossed over the other and his jaw placed upon them. Rear legs kicked out to one side and his fan; her fan fastened by a piece of rope securely around his neck. He didn't go anywhere without it on his person. Any attempts made by strangers or barters at the item provoked a hostile response; a quick correction and a hope that he could move on without a fight over it. Grabs for the; now worn fan that had seen years of travel with him still happened more than he liked to think about. He'd tried his best to keep it in pristine condition. But the once vibrant royal blue had faded, he was certain there some tears in the fabric as well. It's damage bothered him.

The sound of carriage wheels actually made him jump from his day dream of the day he laid eyes upon her. Ever since that day; he craved to know her and no matter how many years went by that feeling never wavered. The mans focus shot up, his head lifting from his paws in a moment, what was a carriage doing here? Kaito only watched at first; quickly recognizing the royal carriage his ember eyes pulling to the figure within. ....Could it be? No. Why would they take the princess on this route? He almost didn't, but he couldn't stop himself, Kaito pulled himself from his alley, closing some distance between himself and the carriage, pausing in the middle of the street ears set atop his head - the princess's royal fan swinging slightly against his chest.
Last edited: Jul 5, 2021

Her guard slowed upon the abrupt arrival of Kaito. Asuka had occupied herself watching the narrow city streets but turned her attention just like the men in her charge.

"Move!" One of her guards commanded, drawing a blade from his belt. Alarmed by the violence directed at a seemingly innocent bystander, Asuka stood up abruptly from the carriage. She nearly toppled herself over but managed to steady to affix her guards with a glare.

"Put away your weapon," She ordered, her guard seemed to almost hesitate, but Asuka did no waver, and the man slowly slide his weapon back onto his belt. It was then Asuka got a full glimpse of the wolf in the street, her veil sheer enough to allow her to see him quickly. Her eyes widened at the recognition of her long-lost fan, and the years since that moment faded away. The boy from the parade! Asuka, in her excitement, hurried off the carriage, her chief servant calling her to stop, but Asuka ignored her.


Rushing forward, she paused a few feet away, providing him enough space as she deemed polite. "I remember you from my first parade! You still have my fan," Her voice was clear and joyful, her guard and servant headed in her direction but sensing them, she halted them with her hand. "May I know your name?"​
You must log in or register to reply here.
Share:
Facebook Twitter Reddit Pinterest Tumblr WhatsApp Email Share Link