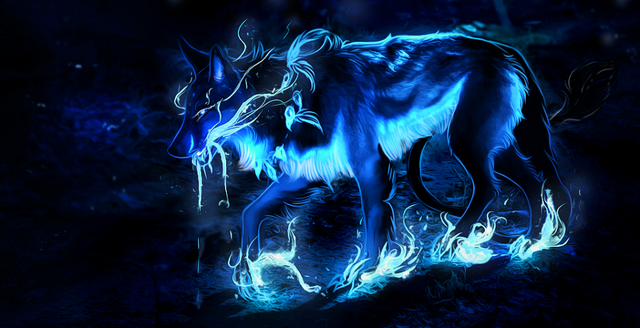 A tired yawn left her body as she walked. Her thoughts were still glazed over as to where she had just come from. She'd have to visit again another time. That chance meeting with her mentor had brought up way too many emotions but she was glad she had gotten to at least see and speak with him. Wrong words may had been exchanged on both ends but for whatever reason it worked out. Left leg paused mid-air as she froze in thought before shaking her head clear and looking up to the ever bright sky. Guess a mid-day snooze would be a good idea as she could smell water not too far away. And it'd give her a chance to get the muck off her paws and relax too.

The trek to the water source, which didn't take long to reach was actually a lake. The sun's rays reflected off the surface perfectly. Her steps to the water's edge were quiet as sapphire blue orbs scanned around. For a bit, she simply stood in the shadows of the trees watching before moving out. Quenching her thirst first, then proceeded to shift to her human form. It wasn't that she liked doing such as the form had both pros and cons. She liked to handle things differently so to say. Even in her human form it was still quite clear that she was a stunning creature. Clothing seemed more tribal like while slender predatory legs kept her standing. Arms stretched upwards briefly as she moved to sit on some rocks at the water's edge, her back facing the sun as she began cleaning off her hands, feline like tail waved slightly to dip partially within the cool waters. Flicking droplets off her hands briefly, she began to comb through her hair as she shut her eyes lost in thought once more.
Last edited: Jul 26, 2021

It had been quite a day, roaming the lands and making some deals here and there with some of the townspeople before eventually moving away to be on his own. Being in his human form all day, it really tire him out so now he was in his wolf form flying through the sky, his pure white light wings spread apart behind him as his black scorpion like tail slashed behind him eventually he spotted some water and began to fold his wings to dive into the lake but he quickly spreads his wings apart to stop himself from crashing into the water and soon he slowly falls into the lake before quickly flapping his wings hard when he felt the cold water. He lets out a low whine at the coldness but soon he just folds his wings to splash into the water.

He brings his head out of the water and shake his head a bit before sitting up, he lets out a cute sneeze as his wings disappear and the markings on his body stopped shining, he began to stand tall and shake his pelt a bit. He began to lick his lips and lean down to drink some water, his scorpion like tail wagging behind him as he drank. He soon stopped as soon as he saw a fish, and he tilts his head to the side watching it swim by and soon… he suddenly jumps forward trying to catch it but he failed. He tries to catch it again splashing himself and he lets out a huff and playful bark as he splashing himself some more while trying to catch it and eventually it does… however it ends up on his head. He quickly backs up which he ended up with him slipping backwards, he did get pretty close to catching it but failed again as it hit his face. He lets out a loud huff as he rolls over quickly onto his stomach as his tail wags happily in the water. He soon stands up again and shifts into a human, thankfully still in his priest like clothes which was now soaking wet and he lets out a warm chuckle to himself. “Oh dear… I did it again didn’t I?” He says mostly to himself as he began to try to clean his glasses unaware of the beautiful goddess like female nearby.​

She paused briefly to dip a hand into the water before returning to her hair. It wasn't long before a quick shadow going over the lake caught her attention and she looked up quickly seeing another Lycan, as he casually fell into the lake. Silently she watched him interact with the water. It wasn't long before a fish must've caught his attention and he thrashed about trying to catch it. Isias blinked tilting her head slightly before a small smile crossed her face. At least he was enjoying himself despite not catching his target in the end. It brought her back to when she had first started hunting in the jungle. The trees were like a second home for her, it was often where others could find her lazing about till an opportunity to catch a meal came along.

Eyes drifted back to the male and she quickly did a double look as he had shifted to his human form. A tall man now stood in place and she couldn't help but offer a chuckle. "Well it looks like I picked the right day to have a show." She wrung out her hair before tossing some back over her shoulder. "By all means continue." she teased, flicking her tail out the water now as she pulled her legs up to her body.

Isaac was in the process of taking off his robes until he heard her voice and he quickly turns and closes his robes, his face flushed red as he quickly fixes his robes a bit. “Forgive me..I was unaware of your presence. I honestly didn’t think anyone else was out here” He quickly stands tall after fixing himself and he even quickly puts his glasses on, pushing them up with his slender fingers as he turns to face her and his eyes widened as soon as they set on her and he quickly grabs his necklace playing with it a bit while whispering to himself. “Goddess please have mercy on my weak bisexual heart-“ He quickly shakes his head and clears his throat as he stands tall. “Um- Greetings, forgive me again for disturbing you if I did.. My name is Isaac, Isaac godheart…Wait did you just said to.. continue-“ His face turns red again as he quickly rubs his neck and looks away.

“I-I-I..forgive me I can’t do such a thing in front of a goddess. My body isn’t pure my lady and I wouldn’t want to make you uncomfortable with all my scars… um…” He slides his hand across his face pushing some of his long onyx hair away from his face as he looks down at the water, a small peek of his crimson eyes can be seen as he did this. Just wide and filled with embarrassment but also some kind of joy. “How about I just continue fishing for you miss…. Forgive me I don’t believe I have caught your name? Would you mind giving me the honor of knowing it or… too soon?” He asks softly as he rubs his arm a bit before looking up at her and giving her a gentle smile. “Either way it’s a honor to meet you despite it being… under unusual circumstances, once again forgive me for being… such a mess and showing such childish behavior…”​

If she had known the male well enough, she would have burst with laughter. She simply tilted her head though, outsiders were a lot more different than she had previously thought. His flustered actions only made her want to tease him even more. She had done the same with Calix too. Her expression simply held curiosity as the male grabbed onto something and began to whisper to himself. Her tail flicked a little as he spoke, “Um- Greetings, forgive me again for disturbing you if I did.. My name is Isaac, Isaac godheart…Wait did you just said to.. continue-“ Another smile graced her face as Isaac became red once more. 'This is too interesting' she thought to herself.

Oh? He had scars? She blinked giving him a once over. From where she sat, you wouldn't be able to tell, then again his clothing pretty much covered his body. "We all have scars" she spoke, the playfulness being replaced with seriousness. "Never feel embarrassed about yourself." She blinked before shrugging then heard, “How about I just continue fishing for you miss…. Forgive me I don’t believe I have caught your name? Would you mind giving me the honor of knowing it or… too soon?” She gave a slight shake of her head as she dipped her head, "It's quite alright. I've already satisfied myself with a meal. You've earned that much from me. It is Isias Anthelm." She let her legs move again to touch the water. "It's not too uncommon from where I'm from" She let a gentle smile.

Isaac just nods slowly listening to her voice and soon he looks away. “Isias…such a beautiful name, it’s such a honor to hear it.” He says warmly as he began to walk through the water a bit more and soon he began to look away. “ah…. Yes I have heard a lot about that, scars being a sign of honor and pride. That you lived…. But these scars I had earned during a time of bloodshed… honestly, if given the choice… I would’ve tried harder to not gain than at all.” He says seriously with a sharpen tone but he quickly began to shake his head a bit and rub his neck as he looks away. “….Well I’ll continue than, I haven’t eaten in a few days so I am a bit hungry and hunting in these robes… isn’t really ideal.” He says with a light warm chuckle as he began to walk over towards her direction however keeping his distance as he began to remove his robe like jacket. Showing his powerful body, he definitely had power and his muscles were proof of that but aside from that, the scars he spoke of scattered all across his body, from many painful things… they were the scars of a slave. Whip scars along his back, bite scars here and there along with claw scars and gently especially the rope scars around his neck and wrists. It was clear from how old most of these were that he had them for the longest of times, he began to stretch a bit as he removes his glasses and places it down by his jacket showing off those crimson eyes of his. “Alright, I shall go fishing now, I’ll be right here if you need anything though. Of course if you have any need for a guy like me” he says as he began to walk back towards the middle of the river.​
You must log in or register to reply here.
Share:
Facebook Twitter Reddit Pinterest Tumblr WhatsApp Email Share Link