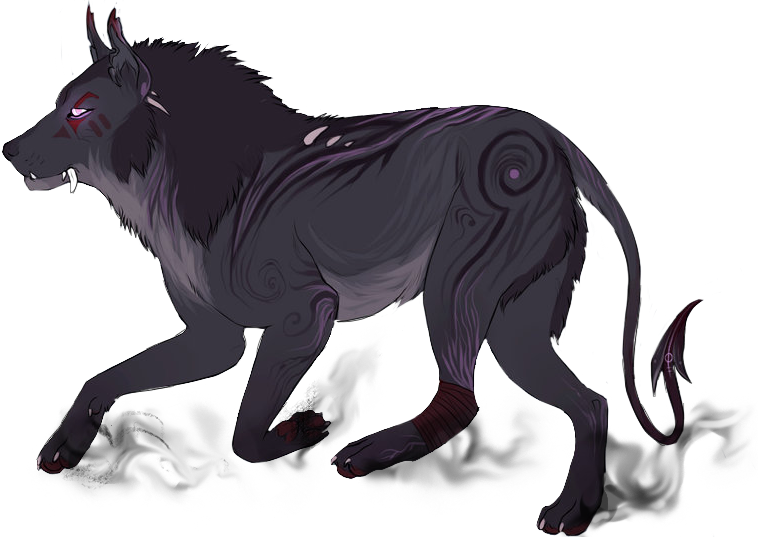 His walk was slow as he trudged through the sands a dark mist swirling each step he took. The sun was just peeking the horizon as he glanced back. He slightly cursed to himself. If he had left while it was still dark he would have been at least two thirds of the way to his destination. But it wasn't like he had to rush off. After all, his sister did ask if he could stay a bit longer to get to know his newest niece. He hadn't wanted to impose though, he was just glad that she was happy and safe. The desert was a harsh place for their kin and even more for raising a family.

They had lost their mother still at a young age due to their father leaving when he was only nine years old. Daimon had to really step up in order to keep them both fed and safe. His tail waved over the ground as he moved on though quietly. They had come quite a long way. His thoughts remained pretty free as they day grew on. The sand beneath his paws getting hotter as he eventually made it to Regent's Teeth and shifted to his human form. With the sun beaming like it was he decided to take a break.

There was a small plateau in the distance as he pulled the cover a bit from his face a bit to reveal light violet eyes and sighed. That was as good as shelter was going to get at the moment. Once reaching the side where there was shade he pulled his head covering back fully looking around before finding a spot to sit for a moment. Taking a buckskin pouch that held some water, he drank. Not particularly thirsty but more so to keep from drinking too much. A yawn left his lips before he found a good enough position to be in and crossed his arms over his chest while pulling his hood back over.
You must log in or register to reply here.
Share:
Facebook Twitter Reddit Pinterest Tumblr WhatsApp Email Share Link